Oxidation according to Dictionary.com is “the process or result of oxidizing.“

Which doesn’t fully help in knowing what it means. Oxidizing is:

This is actually a pretty common question we get from our customers. What causes metals to rust? What causes oxidation? How do you stop it from happening in the future? It almost seems like these areÂ questions that you would go and ask your Father as a 10-year-old. Let’s see if we can explain this as simply as we can. All metals, with the exception of the common precious metals (i.e. gold, platinum, iridium, etcâ€¦), will oxidize when exposed to the elements of the environment. The major players for corrosion and oxidation are oxygen and atmospheric moisture. It is a chemical reaction of the metal surface with the oxygen that causes some of the metal to corrode (or in other terms oxidize) and form the oxidation or better known as metal oxide on the surface. In some of the more rough metals such as steel, the corrosion products formed are easy to see because they sit on the surface and are loose. On metal surfaces that have rusted for quite some time, you might be able to just blow a puff of air at the surface and watch the metal oxide blow away like a powder. The most common corrosion is the red color from iron oxide (better known as rust) seen on unprotected steel products. The red rust formed is generally powdery and loose and easily falls away exposing more and more of the base metal. However, metals such as stainless steel (steel with added nickel and chromium) oxidize as well. Stainless steel is alloyed (strengthened by properties when mixed with other metals. Typically this is done to strengthen the metal or give it specific properties or resistance to others) and therefore ends up being more resistant to metal oxidation. 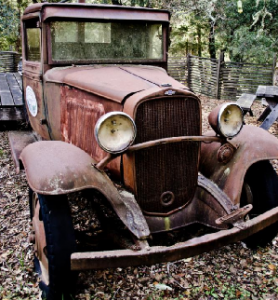 There are many types of oxidation, and they occur through various processes. The most common surfaces for what we’re referring to are metal surfaces, however, just about anything can oxidize given heat, water, and oxygen. The one common denominator in any form of oxidation is, well, oxygen. Simply put, oxidation and corrosion would not occur if you didn’t have the element of oxygen.

How Do You Prevent Oxidation?

It’s not a secret as many of the products that you use at home or work already do this. Scientists have known about prevention for years. The way to prevent oxidation, caused by oxygen, is to provide a layer of shielding between the material and the air. In addition, if there is already oxidation occurring, you’ll want to make sure that as much of that is removed as possible. Honestly, rust removal and preventionÂ is exactly what Sheen Genie does. This could mean using our sealer/repellant or the wax detail spray. They both offer and produce a polyurethane coating on the surface of metal objects or a quick spray of an anti-oxidant. Destructive oxidation cannot occur if the oxygen cannot penetrate a surface to reach the bare surface to corrode.